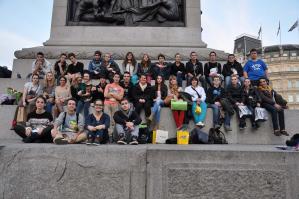 “The journey to London was really cool. There was a good atmosphere. We left Saint Chély at 2pm and spent the day and night on the road. We took the Eurotunnel and arrive at 4am.”

“On the 1st day, we did a cruise on the Thames from Westminster to the Tower of London. We saw the Gherkin, the Shard, and the London eye, London Bridge and Tower Bridge. In the Tower, we saw the Queen’s Jewels, ravens, the Torture Chamber and the old kings’ armors. We were tired after the journey but it was cool.”

“In the evening, we were met by our host families. We were approximately 4 by family. Generally, we spent a good time. We could speak easily because they were very kind, especially in some families. They gave us a lunch bag for the day, composed of sandwiches, fruits and crisps.”

“The visit of the Museum of London was fantastical. This museum is very expanded, there are a lot of different rooms, with various themes, witch follow a chronological order. Two hours of visit into the most beautiful hallows through time. For example, admire mummies, first clocks, royal carriage and finally the JO of London 2012. We recommend it very much.”

“On another day, after the British Museum and before returning in families, we had a walk in Covent Garden. There were lots of little shops with typical and traditional architecture. There was a good atmosphere because there were animations and music.”

“The day after, we visited the National Gallery. It is a gallery with lots of paintings. It’s divided in different places, like Impressionism. We can see beautiful paintings of Monet. Everybody can find a painting to your taste.”

“During 3 mornings, we went to the Language School to improve our English. We were distributed in 3 groups and every day we had different teachers. The lessons were very playful, with a lot of plays and oral interaction. It was benefic because we learned a lot in English.”